55 Days and not counting. 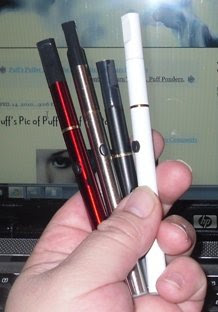 I have been vaping now for 55 days and I have to say I am loving it.

I have not picked up a cigarette since, nor do I want to. There is no withdrawal because I am still getting the one thing that was addicting me to tobacco in the first place and that is nicotine.

I am loving my 510 and have since bought more batteries so I have it in 4 colors now. 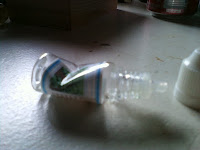 I have even gone off the tobacco flavors and now vape pretty much only coffee and Dr. Pepper. I loved that one so much that I squeezed the life out of the bottle to get the last drop. More is on the way thank god.

Now I am thinking ahead. With all the talk about e-juice having issues at customs, I figured I would stalk up. You just know the tobacco lobby is going to be all over this shit once it catches on. After all, this could potentially cripple the industry if everyone who currently smokes switches to e-cigs. And since the tobacco tax is justified by claims that the proceeds go to cover the costs of illnesses attributed to tobacco smoke use, well....the government will be hard pressed to get the same amount of tax applied to e-cigs if and when they start to regulate them.

So, I have begun my stockpile with some DIY stuff. High concentrate nicotine, glycerin and flavorings, so I can make my own. Right now....I would say I have enough supplies either in my possession or on order to last me a couple years.

It's a sickness. I have got to stop ordering.

I don't know why I am worrying. After all, if a 10 year old can get crack at school, I should be able to get a supply of nicotine juice just as easily.

Matthew Salmon, former Republican Congressional Representative from Arizona responds to the FDA's late release of it's studies on Electronic Cigarettes.
Posted by Evel at 14.4.10 1 comment:

Kits arrived in spite of it all.

I get a call at 8:20am this morning, it's the post office. I am expecting two packages, sent two days apart.

They have a package, probably the first one that was sent, "You expecting something from Taiwan or Japan or somewhere?" These are the people entrusted with getting shit to you and he can't determine what country it came from.

"Yeah, that's it. I just need your address, cuz all this says is New Glasgow, NS." 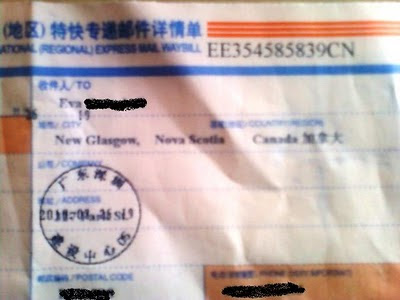 Okay, so they got the general vicinity and they figure, oh yeah, someone in Nova Scotia will know this chick.

"Why not just keep it there, and I will pick it up." No sense confusing them further.

I go to get the package and it is actually the second one, the one with the kits in it. I was worried about that one because it was the one that cost me so much. I heave a sigh of relief. I ask if there is another and they said no, check back tomorrow.

Weird that the one they sent two days before got here, but not the first one.

Anyway, I get home and no sooner am I through the door but there is a knock. Its the mailman, with the other package. This is the same man that has never attempted to bring a package to me before, he usually assumes I won't be there and only brings a hanger. I know this because I have actually caught him leaving a hanger that says 'an attempt was made to deliver the package but you were not home, pick it up at the post office.'

After he passed me one a few weeks ago, I went to the post office and asked her that if he hands me this hanger, how does that constitute him 'attempting' anything? Since then, I have seen him hauling packages up and down the street and now he doesn't speak when I say good morning.

But I get my packages on the first try now.
Posted by Evel at 6.4.10 No comments:

I go into a slow burn every time I see someone in a store walking around talking on their cell phone.

If you find you are unsure of what you are picking up for someone and you huredly ring them to get clarification, that's one thing. But having a conversation about some daft thing your boyfriend did the night before while you browse the isles is just fucking rude!!!!

Carry on that conversation as you stand in front of me in line for the cashier, I can barely contain my contempt.

Then you give me the stink eye when you realize I can hear you, like I want to eavesdrop on your innane conversation with your friend.

The cashier is trying to ring through your purchases and you can't give her your attention for ten fucking seconds?

I just want to punch you in the throat!!!!

I am completely and utterly addicted to Karl Pilkington.

Turns out that before the HBO show Ricky Gervais and his two little sidekicks had a radio show. So there are thousands of hours of audio on YouTube. I spent the better part of my shift listening.

At one point I was laughing so loud that I had to hang up on some poor slob who called in just as I was snorting milk out of my nose.
Posted by Evel at 1.4.10 No comments: