"There will be a lot of people on Facebook eating a big plate of crow today".

Those were the words of Eva Campbell, upon hear
ing that Christopher Falconer, a convicted murderer out on parole, had been charged with killing Amber Kirwan. Campbell, is Mason Campbell's mother, Amber's boyfriend.

Shortly after Amber disappeared while walking from a New Glasgow bar to meet Mason, social media sites were flooded with rumours and innuendo, many pointing the finger of blame at Campbell.

"They weren't just suggesting he was involved", says Campbell, "they came right out and said he was guilty."

It didn't help that Mason seemed to stumble through media interviews about his actions and whereabouts after Amber failed to show up for their meeting in the parking lot of Big Al's convenience store.

And we all know police questioned Campbell and given the sad fact female victims of crime so often die at the hands of a boyfriend or husband, police would have considered him a person of interest in the early stages of their investigation. But while police used facts and evidence to determine Campbell's innocence, that didn't stop those on social media from convicting him.

"You can imagine how bad it was", says Eva Campbell, "they just said whatever they thought, and pretty much twisted anything anybody said".

Campbell says at first they tried to ignore the comments. Then they tried to answer people's questions. But that didn't last long.

"It just seemed like if we said anything, we were lying; if we tried to defend him we were lying, and if we didn't say anything we were guilty."

Eva Campbell says some even called for vigilante justice. There were calls for Mason to be beaten and assaulted. People said they hoped Mason got what he deserved. In fact, Campbell says Mason was punched in the face one night while at a pub, for no apparent reason.

And the comments just kept coming. The night before Falconer was charged, while reports were circulating that two people had been arrested, some posted on Facebook that Mason Campbell was one of them.

Campbell says there were also messages of support and the family tried to tell themselves to simply ignore the rants of a few "morons". But in chatting with her, you could tell that didn't work; you could feel the hurt and lingering bitterness over the phone line.

I asked Campbell if she had a message for those who flock to social media to eagerly spread and consume the rumour and gossip that always surrounds cases like this.

Convicted killer Christopher Alexander Falconer, who was on parole when Amber Kirwan disappeared seven months ago, has been charged with kidnapping and first-degree murder of the 19-year-old, say police in New Glasgow, N.S.

Kirwan vanished last October after a night out with friends. Falconer, 29, was granted parole a year ago after serving time in prison for the second-degree murder of the cab driver in 1998.

At a briefing this morning in New Glasgow, police said a woman was arrested Wednesday but released in the evening without charges. No other arrests are expected.

Falconer appeared in court briefly Thursday morning. He will remain in custody until his next court appearance on May 28.

Marjorie Kirwan, who lost her daughter months ago, said the charge against Falconer is a "bittersweet moment."

"At the end of the day, Amber's still gone," Kirwan said Wednesday night, adding that she always had faith in police. "It's just a matter of waiting and patience."

Kirwan, 19, left Dooly's pool hall in New Glasgow at about 1:30 a.m. on Oct. 9. Her friends said she was going to meet her boyfriend, Mason Campbell, at a convenience store nearby.

Campbell told police that she never showed up.

In a security video released by police, Kirwan is seen speaking with someone in a crowd of people. She then leaves the crowd and walks up the street alone.

Police and dozens of community members spent weeks searching the area for the young woman or any clue about her disappearance.

On Nov. 5, Kirwan's remains were found in a wooded area off Heathbell Road, about a half-hour drive from the pool hall.

Police ruled her death a homicide but didn't say how she was killed. 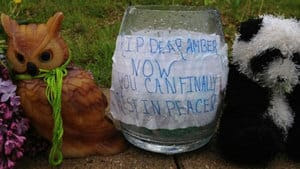 This message was left at a makeshift memorial in New Glasgow on Thursday. (Phonse Jessome/CBC)

The weeks stretched on with no word of an arrest.

According to National Parole Board documents, Falconer's parole was revoked last fall while police considered him to be a "subject of interest" in a serious ongoing investigation.

They also searched a home and property rented by Falconer's stepsister, a few kilometres from where the body was found.

Falconer was sentenced to life in prison after being convicted of second-degree murder in the 1998 death of a cab driver in Heathbell.