Your customer’s safety IS your concern.

First of all, this is my opinion. If you don't agree, I do not give one fuck. I am seeing this way too often.

Customer comes into the shop with a mechanical mod. Right away I see he has an RDA on it and he is asking about premade coils.

At this point I start questioning him.

What build do you have on it now? He just pops the cap off and shows me.
What ohms are the coils? "24 guage", he says. He has no idea what I am asking, someone at the 'other' shop built it for him.

At this point I take the mod from him. Let's see what battery he's got. I pop it out and it is pitiful. 2500 mah, 3.7v no other info on the battery and he has no idea. What catches my attention is the rips in the battery, bare steel showing. I just hang my head. "I am NOT putting that back in your mod."

Onward to the RDA. Dual coil, nicely built. He said they built it and installed if for him. Do you have an ohm meter? (blank stare, he has no idea what that is.) I put the RDA on my regulated device. The ohms are reading 0.15. Again, I hang my head.

Did they ask him what device he was firing this on? Did they ask what ohm's he prefered? Asking just one of these questions would have alerted them that this person had no idea what he was doing and needed instructions. Did they tell him what ohms the build was when they passed it back to him? I was met again with a blank stare.

"This, right here is why I do not sell mech mods", I tell him. "Do you understand that this is electricity you are dealing with?" "You know all those 'exploding' mods you see in the media? This right here, is how it is done."

I give him a battery wrap and tell him how to rewrap the battery. ( he says it is not that old) I tell him if you want to use that device it was safer to use just a regular tank with 1.8(ish) ohm coil inside. I tell him if he wants to blow clouds with a rebuildable, he needs to learn about ohm's law, coil wrapping and battery safety. Until that happens?...get a regulated mod and a subohm tank. You can blow plenty clouds and be safe doing it.

It burns me that to make a buck, a shop will sell someone a device with absolutely no instruction. Especially a mech mod. Oh its simple, who needs instructions? Mech mods and building coils need the most instruction. You have a device with absolutely no safety features with an iffy battery chemistry and ohmage that is beyond sub. You are asking that battery to push 90+ watts. Another exploding mod is just what we need with pending legislation that could regulate us right out of business.

I do sell rebuildable supplies to people who clearly know what they are doing. I do not ever build them for them. If they ask me to, that is a clear indication that they should not be using a rebuildable.

Selling a smoker/new vaper a 200 watt mod with a subohm tank on it because the only juice you sell is 3mg max VG is just ridiculous. These people are just trying to get off cigarettes, not fog a stadium.

"It is time we take political correctness and throw it in the garbage where it belongs and start calling a spade a spade." ~ Brigitte Gabriel (Founder and President of Act for America)

I get that it is fashionable these days to bash Christians but you would make a better point if you found a quote from the New Testament....Christian = religion based on the life and teachings of Jesus Christ.

Jesus did not exist in the Old Testament.

It's a crazy thing when people die, everyone says such nice things about them. Even the really big loser/asshole/psychopath/pedophiles of this world. I keep thinking, did this person, spouting poetry about the dearly departed, ever actually MEET them? Or did they just forget how much of a maggot the person was? 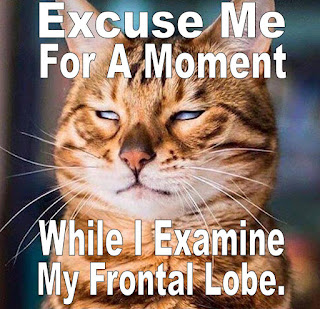 All of a sudden they go at it like its a real estate or personal ad.

"He was a quiet sensitive soul" DUDE! He was a pedophile. And if you believe in God, no he is not looking 'down' on us all he is most definitely peering up our skirts.

"She was such a sharing person." Maybe over sharing...she told people at the bar that her kids were dead when, in fact, she had just left them home alone. I am sure she got more than a few free drinks out of that.

"He was a pillar of the community." Maybe of the Arian Brotherhood Community.

"She put her heart and soul into everything she did." OMG....look up 'sociopath' in the dictionary...you will find her picture. She had the attributes of a cult leader. She manipulated 3 people into offing themselves just so she could host the candle light vigils and gofundme campaigns to help with funeral expenses.

I am sure everyone knows that one person that, upon their death, would be like me. Attending the wake armed with a hat pin so I can drive it into their temple (on the guise of kissing them goodbye) to make damned sure they are actually dead from one of the many terminal illnesses they NEVER had.

For the love of all things holy. When I die, please do not forget that I could be a complete asshole at times and I probably won't get wings on the first day. Me and Clarence will be fighting for the record.

Don't let the wife do the math.

I see a post on Facebook, Bott has sent a picture of his daughter to show another friend.  This is what transpires. 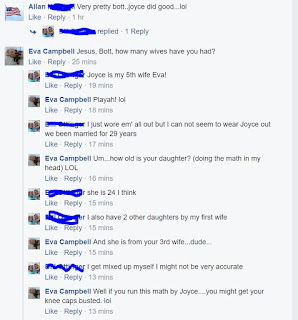 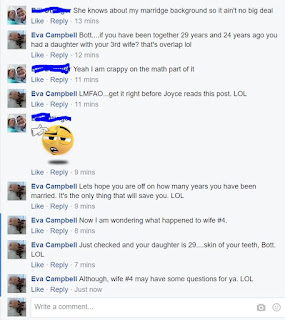