What's keeping me up at night?

The fact that we, the vaping industry, are being treated, classified and regulated in the same way that the tobacco industry is. They are treating us like Coke and Pepsi, when in reality we are more like Oil and Water. I can't even think of anything more completely opposite.

After Bill 60 here in Nova Scotia, we felt like we had a victory. I do not believe that to be true now. Granted, we were not shut down, but now public perception is that we are just another form of smoking tobacco and the media isn't helping when it comes to clearing up that misconception.

The worst thing that could have happened did happen. We got ourselves lumped into the same category as big tobacco. We are NOT tobacco. In fact we are the direct competition to tobacco. And not like Coke vs Pepsi, but more like whale hunters vs Greenpeace, or ??? (I really can't think of anything that is more polar opposite.)

Oh no, they say, you will have your own classification. Yet, there we are in the black and white, in the 'Tobacco' Access Act. This is even after producing evidence that we are in no way a tobacco product. You will get exemptions for vape shops, that was a flat out lie, it was conveniently left out of the final draft of the legislation. Oh, and they also assure us that they will never tax us as tobacco. Ya, after all this? I don't trust that anymore.

How did this happen?

We just were not prepared for the interactions with politicians. We thought that we could win with science and logic on our side. The politicians said all the right things and patted us on the back until we realized that what they were doing was inserting a knife.

Now they have us by the short hairs. We have been inserted into the Tobacco Access Act. Every day when I open the door to the shop, I stare at this. 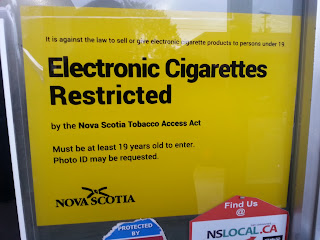 And every day, I begin a slow burn. I am angered and completely offended by having the word TOBACCO on the door of our shop, in which WE DO NOT SELL TOBACCO!!!!!!!!

The following is the speech I presented to the Law Amendments Committee. Along with lab results of the e-liquid showing no tobacco content. All on public record.

Madam Chair, members of the committee:

My name is Eva and I am co-owner of the End Vapor Shop in New Glasgow and Truro.

I thank you for allowing me to speak today on the matter of amendments proposed to the smoke free places act. Bill #60.

Electronic cigarettes must not be defined as a tobacco product because it, quite simply, is NOT a tobacco product and in fact is in direct competition with tobacco. That being said, I submit test results that indicates that the eliquid we and other vendors sell has no tobacco content.  As the bill is presently worded, it is clear that the honorable minister of health is not aware of the obvious distinction between tobacco flavors and flavored tobacco.

Looking at the list of 4000+ chemicals and known carcinogens in traditional tobacco cigarettes and comparing them with the 4 ingredients in the eliquid (none of which are tobacco by the way)  I personally concluded (albeit, not scientifically) that you really don’t have to be a rocket scientist to figure out that this is  safer alternative. But you don’t have to take my word for that, in recent years, there have been an overabundance of scientific research that proves just that. And my business partner will supply you with that information.

As vendors and a consumers, we welcome sensible regulation of the electronic cigarette industry separate from tobacco. In fact, we already self regulate, in that we refuse to sell to minors. We require proper labeling of the ejuice, child proof bottles, proper safety certifications on all our hardware  and independent lab testing of the liquid by a Health Canada accredited testing facility. I submit also our suggestions on regulating electronic cigarettes as a separate entity from tobacco.

What I and others object to is electronic cigarettes being labeled as a tobacco product. Aside from the fact there is no tobacco present in the liquid, we view traditional tobacco as a direct competitor to our industry. I personally object to the Honorable minister of health’s attempt to redefine tobacco to include something that is absolutely not a tobacco product.

This is like saying, we will be banning apples and by the way the definition of apples will now be extended to include... staplers. I am thinking Webster’s may take issue with that.

I am perplexed as to why the Honorable Minister of Health thinks we need anything else besides age restrictions for entry to vape shops. That alone would obviously negate the concern that we would be marketing to children. Now, I am not a drinker so I was aghast to learn that this was not a requirement for the NSLC stores, which openly displays bubblegum flavored vodka and Caramilk cream liquor. (what’s more kid friendly than a chocolate bar?)

Flavored ejuice is just that...flavored. It consists of propylene glycol (flavorless), vegetable glycerine (flavorless), may or may not contain nicotine (also flavorless) and food grade flavoring. Even tobacco flavored ejuice is just that….tobacco flavored, not flavored tobacco. The distinction must be made and I think this is where the Honorable minister  of health is confused. Take away the flavoring and we are left with flavorless vapor. People don’t even drink flavorless water anymore.

Vapers may start off with a tobacco flavoring, but most quickly find  the flavor of tobacco objectionable. After all it was never the taste of a cigarette that got us hooked. The majority of our customers are over 40 and enjoy having a variety of flavors available to them.

Clearly I am not a child. However, I enjoy vaping fruit and candy flavors. Tobacco ‘flavors’ (not to be confused with tobacco that is flavored) in no way appeals to me. Saying that flavors only appeal to children is ludicrous, unless you contend that all Canadians upon reaching the age of 19 exist on cream of wheat and water? I did not think so.

Removing the flavorings from ejuice will effectively shut down the legitimate industry and send those consumers into either the black market or worse, back to smoking traditional tobacco. Today I can tell you I will never  smoke another tobacco cigarette, as long as this is an available alternative.

Not letting the public see their choices in delivery systems (which incidentally look nothing like cigarettes) and prohibiting point of sale marketing would be crippling to our business. Again, this is not a cigarette where all you have to do is light the right end and go. People benefit from hands on demonstration of the product and instruction on care, use, proper handling of the device.

It is distressing to me that our honorable minister of health has brought forth this bill without the slightest understanding as to what this product is or how it works. Please, stop calling it tobacco. There is no more tobacco in this than there is in the coffee you drank this morning.

All I am asking is that before you jump on to this particular band wagon, you avail yourselves of the research that is available and make an informed decision about the inclusion of electronic cigarettes in Bill No. 60 and the proposed changes to the amendment. Please consider what this will do, not only to the dozen or so strictly vaping businesses in Nova Scotia that will inevitably be shut down, but also how this will affect the thousands of Nova Scotian tax payers that will lose this ability to continue on with this safer alternative to traditional tobacco.

This bill is old fashioned slight of hand designed to make it impossible for any MLA in the house (regardless of their affiliation) to vote against it. It’s battle cry? THINK OF THE CHILDREN AND GET RID OF FLAVORED TOBACCO ONCE AND FOR ALL! Then in the fine print it exempt the only flavored tobacco that anyone is even aware of. In reality it is a direct shot across the bow of anyone who tries to compete with big tobacco.

I am NOT a smoker, this is NOT tobacco and must not be lumped into the same category. I suggest that you remove mention of electronic cigarettes from this bill. If the Honorable minister of Health  would like to propose sensible regulation on electronic cigarettes as its own consumer product separate from tobacco, I am sure we would all be open to that.

The only thing this bill, as presently worded, will accomplish is the destruction of the most effective form of tobacco harm reduction to date and serves only to protect traditional tobacco from its only real competition.

Thank you for your time.

I really thought that I, and the other approximately 50 speakers, got through to them. When the committee sat down for Law Amendments, they had no idea that the bill in front of them was complete and utterly useless.

There was not a single MLA in that building, (and believe me by the end of the day, every single one of them made an appearance at committee) not one of them understood that e-juice contains NO TOBACCO.

Think about that for a minute. 'CONTAINS NO TOBACCO'.

If you could have seen the look on their faces when they realized that. The Liberals especially were embarrassed that they had supported a bill for a ban on tobacco that would have absolutely no effect on tobacco.

Had everyone just sat back, this bill would have been a slam dunk for the Liberal majority government.

Until the legislation (Bill 60) was introduced, I and pretty much everyone I have spoken to was only aware of one flavor of tobacco and that would be menthol. Thanks to the liberal government I (and any kid that watches the news) am now aware of watermelon cigarellos.

Sounds like the LIBERALS are the ones responsible for marketing flavored tobacco to children. Great job!

I could go on forever, but in my opinion, the new fight has to be to get e-cigarettes separated completely from traditional tobacco. Period.

For my own sanity and for the sake of all smokers looking for a better tobacco harm reduction option, I need that sign off the door.