I guess I had company. 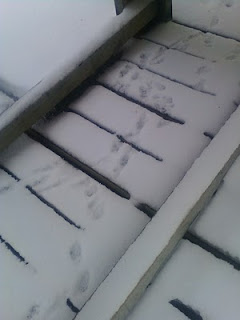 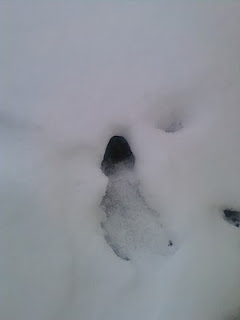 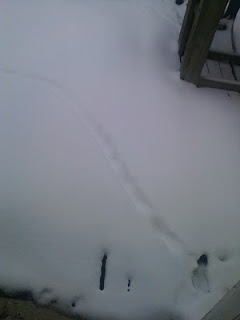 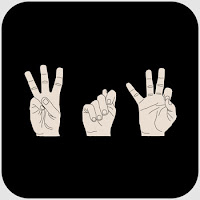 I know this might sound cold and I am probably going straight to hell for suggesting it, but if you have 12 children, you need to take extra precautions with your well being. Take your vitamins, look both ways before you cross the street. Basic common sense shit.

And, Dude, stay the fuck home in a blizzard. Barring that, wear your seatbelts.
Posted by Evel at 24.1.10 No comments:

I am all over this! 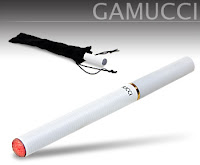 I have tried Champix twice now and I know this will sound lame because this is the second time but it really does work.

It takes the addiction completely from you. You do not want a smoke after you shove the first pill down your gob.

What it doesn't take away is the habit. I am fine when I am not working, I don't even think of having a cigarette. However, when I am working, I find that I will look over and there is a cigarette burning away in the ashtray that I don't remember lighting.

Recently I ran across an ad for an electronic cigarette.

How cool is this? I don't have to quit smoking. (I love smoking) It's like fake smoking.

The starter kit costs $74 US and comes with 5 cartridges and Each cartridge is equivalent to 12-15 traditional cigarettes. Then each 5 pack of cartridges are $10US. If it works, it will more than pay for itself.

I am soooo getting this thing, screw quitting smoking...this is a gadget and I love a good gadget. I need something to puff on and even though these things have nicotine, at least I will cut out the 4000 other chemicals. Not to mention I won't have to go out in the Canadian cold to smoke it. Now I just have to show this to the sister and see if she will let me use her credit card.

What's in my wallet? 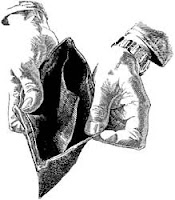 For years I have been doing my own tax returns, first by paper then in recent years I have been using Ufile. I loved it, very easy to do, all the calculations are done for you and it is a very reasonable filing fee if not free for some people.

But then you hear the hype how a professional preparer will get you more of what you are entitled to. Blah, Blah, Blah.

When you take your tax info to a professional tax preparer. What exactly do you expect? I expected that the return would be, at the very least, correct.

Last year I decided, foolishly as it turns out, to go with that big tax preparation outfit. H & R Block.(tag line (ironically) is Get it Right) I have to say, what hooked me was the guarantee. When it comes to taxes, you are always worried that mistakes can be made and you really don't want the government on your case. And I confess, I did not read the fine print. I thought the guarantee meant that if they fucked it up, it was on them not me.

Long story short, what my 'professional tax preparer' recorded as a three should have been an eight and the return was off five grand.

One year later, the government checks the return and catches the error and sends me a letter. Now I am on the hook for $1700.

So, I call up H&R and get Bob. Bob apologizes and offers to cover my interest and penalties but not the $1700 mistake.

"Ah...what about the hundred and eighty three bucks I paid you to prepare this in-cor-rect return?" I split the syllables so 'Bob' understands my displeasure.

"Hmmm...I can probably get you a refund for that as well."

Don't get me wrong, I realize that I got $1700 last year that I was not entitled to but that was only because I trusted H&R Block to 'get it right'. Given the choice I would not have 'borrowed' (which is essentially what I did) $1700 from the government. In the same vein, I dont' have a credit card because I don't like to spend money I don't have. Now I have to deal with a new year and I am already $1700 in the hole.

The moral of this story is read the fine print. The H&R Block guarantee isn't really any better than what you would get from your paper boy. He fails to bring the paper, you get your money back.
Posted by Evel at 14.1.10 2 comments:

The movies in 2009 were a little disappointing

Looking forward to some movies in 2010

Up in the Air - Anything with Clooney. (Sigh)
Prince of Persia
Sorcerers Apprentice -
Spy Next Door - Jackie Chan makes me chuckle
Extrodinary measures - Anytihng with Harrison Ford....I am going to be screwed when all these old guys finally pack it in.
Ironman 2
Sherlock Holmes
Posted by Evel at 11.1.10 1 comment: