I can't seem to win today.

Was having problems getting a new ringtone for my phone. So I broke down and used the old 'contact us' feature at Telus. 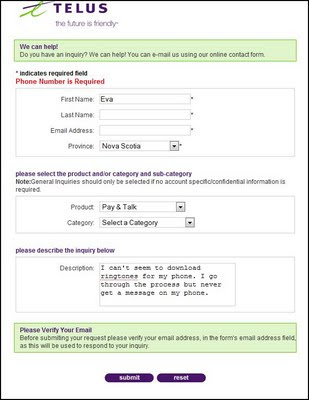 I love this president!

And the award for biggest A-Hole on the planet goes to... 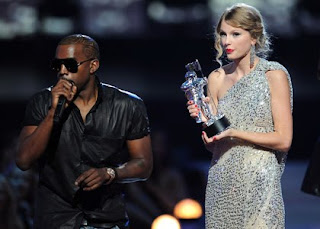 What the hell is wrong with Kanye West? Who brought this asshole up? If I was his mother I would have dragged his ass off the stage by his ear. This sweet, country singing teenager wins her first VMA award and this douchebag, grabs the mike from her and basically says that she robbed Beyonce. That it was Beyonce who truly had the best video and should have won. And Beyonce puts on her best WTF smile. She was mortified.

It wasn't easy finding the video for this it was even taken off the Associated Press website. I am not sure who they are trying to protect, Taylor from the embarrassment, the producers of the VMA's or the asshole, Kanye. I have to see this so I am downloading it from Mininova.

But this is what I could find.

People were shocked! I mean really, this kid is completely classless. It was all over Twitter, as it was happening. Katy Perry Twittered: FUCK U KANYE. IT'S LIKE U STEPPED 0N A KITTEN.

And the Classy Chick award goes to?... Beyonce. When she was accepting her award she brought Taylor back on stage so she could finish her acceptance speech. Very classy.

(couldn't find a video for that either)

I heard that Kanye was supposed to perform after this but was cut last minute. I can't confirm that until I see the program but I can't imagine him getting anything but boo'ed after that load of crap he pulled.

Okay, so I watched the whole thing. Yup, KW, still an A-hole. But what was most disturbing was Lady Gaga.

Talk about scraping the bottom of the barrel.

Should I be worried? 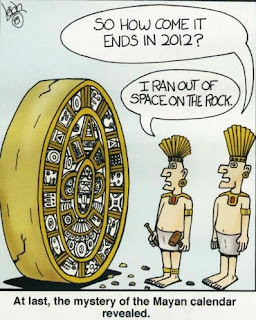 So the doomsday crap begins. Apparently on December 21, 2012 its lights out for the earth.

Okay, so you believe it. Then what? Can you stop it? Haven't seen one person come up with at suggestion. Can you survive it? Not that anyone is saying. So here is the question.

Who the fuck cares?

If you can't stop it or survive it, why bother worrying about it? You will only work yourself up into a frenzy for no good reason. If it is true, you wasted the two good years you had left and if its not true you have wasted two years fretting over it. Quite possibly working yourself into a state that causes small children to give you a wide birth. Might as well get yourself a couple dozen cats to keep you company in your old age cuz everyone else already thinks your nutts.

Everyone is talking about the Mayans...if they were so fucking brilliant, where are they now? Oh....but their calendar ends on December 21, 2012. Dude...they are extinct....at some point there was no one left to update the calendar. As far as I can figure, they chiseled everything in stone....time consuming, surprising they made it to 2012. Just a thought.

In case you are interested here is the beginning of a six part 'documentary' on the 2012 thing. Myself, I couldn't get past part 2.