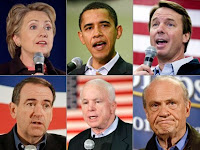 John Mccain is doing the happy dance tonight. If the election were today you would be saying President John Mccain. He is the clear winner early on in the New Hampshire primary and waits to see who he is up against on the Democrat side. Close race between a woman and an African-American. It couldn't look better if he rigged it himself.

Don't get me wrong, I don't think there is anything wrong with either a woman or an African-American becoming president. Do I think the yanks will actually elect either one of them as president? Not a chance.

I have heard Barack Obama speak, and I think he would make a damn fine president. But the yanks don't always do what is right for them. No matter how progressive they think they are, they won't get past his skin color. Not even Oprah can pull that shit off. Mores the pity.

Not sure what the Democrats were thinking when they sent Hilary out on the road. I suppose she is the most recognizable woman in the party, but for what? Letting her husband live after getting serviced by an intern in the oval office. She lost the red-necked vote there. Maybe she is hoping to get Bill out quail hunting.

It isn't quite time to count chickens, of course, John Mccain won the NH primary once before in 2000 but still didn't get the presidential nomination. But he has got to be thinking the view is very good from where he sits right now.
Posted by Evel at 8.1.08

Are not Hillary and Obama Democrats?

I live down here.. and i'd like to think the US was "open minded" and would vote the right person in.. but we had Bush for 2 terms.. so I know better.