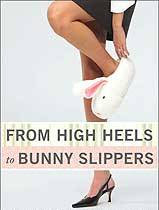 I applied for a job with the local Undisclosed Internet Service Provider™ to do tech support from home.

Unfortunately, everyone else at the Undisclosed Customer Service Center™ had the same idea and there are only 15 openings. What would be really cool is if they hired everyone that applied. We could all do a stampede out the door at the same time. Trampling the Big Giant Head on the way out. (A girl can dream)

I would kill for this job. The mere fact that I could smoke at my desk again would convince me to take a cut in pay. Not to mention the whole 'bunny slipper' aspect of the job.

They supply you with a dedicated phone line, high speed internet, computer, phone, the works. Some reports say desk and chair, but that is not confirmed. Factor in that as an employee, you would get a deal on your internet, cable and phone service and that alone justifies the cut in pay. Their base salary is only 40 cents less than I am making now.

The cutoff for applications was on Wednesday and people were already getting callbacks yesterday. I, of course, was not one of them but there is still hope.

I had a 25 minute phone interview at noon today. The interviewer said he was impressed with my resume and how I handled myself on the phone.

There is a catch, however. He wants my last employers name as a reference. That would be the one that fired me. You would think this would be an upsetting turn of events. But alas, the planets have aligned themselves for Evel and this particular turn could not come at a better time. (All will be revealed in a later post)

Anyway, I have a face-to-face next Wednesday with another person who will grill me on the technical.

Good luck... keeping my fingers crossed for you!

WOOT!!! Fingers, toes, and eyes crossed for you!

I am thinking positive, I rearranged my room to accommodate a desk.