From Milton to Kojak 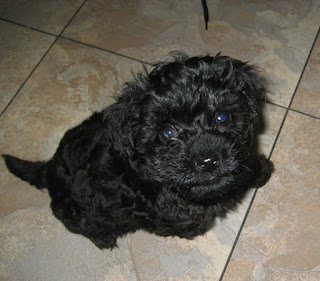 Milton...will be shaved on Monday.

Milton is a Yorkie-Po. We named him after my father ... well ... because he has black hair. He looks fine, but if you pick him up he feels like a sheep, he is so matted next to his skin. Poor thing.

He is a year old now and no, we have not had him fixed yet. We really need to do that soon, he needs to calm the fuck down and realize we mean business.

The sister hates him. He eats her shoes, he eats the wallpaper off the wall, he shits all over her lawn and if he gets near the garbage, he either pisses on it or tears it apart. (depending on the contents, apparently)

She has changed his name to Shutthefuckup. But he does not come when you call him.
Posted by Evel at 15.8.12

I dont care what they say that dog is freaking adorable.
I would have him in a heartbeat.

well, i will post a pic of him after the shaving lol, we shall see.