I have been rocking the e-cig for 19 days now. I have to tell you, I am lovin' it. Being a gadget junkie, I was predestined to try it and I am glad I did.

I guess you just have to try it for yourself, but it is just like smoking. It feels like smoking, it looks like smoking, you get that hit in the back of your throat like smoking only you get just the nicotine and not all the other crap chemicals that you get from tobacco smoking.

I find that I can breathe better and I am even cooking, cuz shit just tastes better. You heard me, I am cooking....food, meals, like meat and potatoes and (what are those green things again?) vegetables. I kid you not.

I have not had a 'real' cigarette since I picked up this one. After (I would say) about 6 days this thing has paid for itself. Considering the 'juice' you use for it costs about $11 a bottle and it looks like one bottle will last me the better part of a month. So I am going from $300 per month (easy) with tobacco, to $11 a month vaping.

Now I want to clear this up. This is not, I repeat, NOT for quitting smoking. You are still getting nicotine, which is the only reason you can't quit tobacco. The nicotine is what you are addicted to. Granted, you could keep lowering your dose of nicotine until you eventually do quit, but if you really wanted to quit you could do that with just about any smoking succession aid.

I know why all those other things did not work for me. It is simply because I do not 'want' to quit smoking. I like to smoke, I enjoy it. This way I can still smoke, I just won't die from it. I don't see the down side. 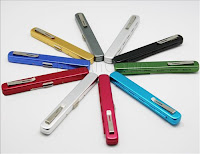 I will say that I am pumping a lot of money into this thing initially. Only because being a gadget junkie, I need to get every possible accessory for this thing. Like one in silver and a cute little case to carry it around in. This also has led me to the realization that the mAh (or milliampere-hour) of the battery is the thing to pay attention to when choosing an e-cig.

The Joye 510 (the e-cig I have now, pictured above) comes with a 180mAh Rechargeable battery (two in the kit). When you first get the kit you realize it is going to be a bit different than drawing on a cigarette. Long slow draws are the way to go to get a good hit and lots of vapor. Long draws heat up the atomizer more. The warmer the atomizer the better the vapor. It takes some getting used to. 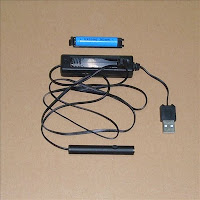 It was very impressive until I purchased my first accessory, the USB pass through battery. I didn't want to have to worry about the battery dying while I was working, and with this I just plug it into the laptop.

Now, the pass through has a 360mAh Rechargeable battery inside. The first time I tried it it just about cut the throat out of me. You just can't draw on it the same way as you would the 180mAh. You learn this very quickly. As the battery gets weaker (once you realize it is too much and unplug the thing) it becomes more of a normal cigarette smoking draw. 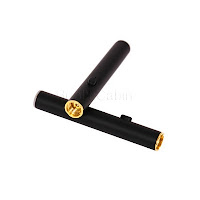 With that in mind, my next order will include the mega battery, its about in the middle of the road and wireless. It is a 280mAh Rechargeable, a little longer than the standard. Once I have this I think I will have the perfect setup and I can rest the credit card for a while.

As far as the juices go? I started with a Marlboro blend and if you are familiar at all with American cigarettes it was very potent. I have since ordered and received some flu curred and Camel flavored juice. I prefer the Camel (It is much smoother) but the flu curred is very nice as well. I have also ordered some flavored juices. Watermelon, apple and mint. So I should have enough juice to last me at least 6 months.

Bottom line, it might not be completely healthy to vape (considering you still get the nicotine) but I don't have to be a doctor to know that it has got to be better for you than tobacco smoking.
Posted by Evel at 13.3.10

Email ThisBlogThis!Share to TwitterShare to FacebookShare to Pinterest
Labels: vaping

This sounds pretty cool. I don't smoke, but if I did, I would HAVE to have this! :)

Cooking, huh? Well, I found a company in Canada and thought I'd give her a go... but, if I have to COOK, then it's definitely outta the question!! lol.