During the rebroadcast of the April 2007 re-dedication ceremony of the newly restored memorial at Vimy Ridge, I hear the old girl introduced as the Queen of Canada. Like that is all she is. Can't believe this is the first time I am hearing about it. Usually the the queen will express her displeasure over shit like that. Like the time some Australian politician actually touched her, you would think they punched her in the throat or something.

But I digress. If you haven't seen this monument in France, it is quite impressive. 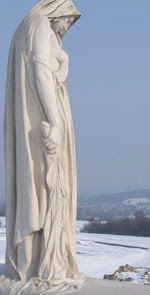 The Canadian National Vimy Memorial is one of Canada's most important overseas war memorials for those Canadians who gave their lives in the First World War. It was constructed as the national memorial for Canada's 66,000 war dead and is located in France, on the site of the Battle of Vimy Ridge. The memorial stands atop Hill 145, near the towns of Vimy and Givenchy-en-Gohelle, in the Pas-de-Calais département of northern France. In 1922, the Government of France granted "freely, and for all time, to the Government of Canada the free use of the land exempt from all taxes," as an expression of gratitude. It is ceremonially considered Canadian land, but unlike an embassy, it is subject to the laws of France.[1] The entrance to the park bears a sign that reads, "The free gift in perpetuity of the French nation to the people of Canada."

She mentions that there were 4 Victoria Crosses awarded to Canadian soldiers for conspicuous bravery during this battle. Very impressive considering there remains only about 100 awarded to date.

Most impressive was the actions of Captain Thaine MacDowell. Something to keep in mind today.
Posted by Evel at 11.11.07

WHAT .. nothing about the CANADIAN dollar being worth more then the US Dollar!!