So, its been a while since I have blogged and a lot has gone on.

The main reason that I haven't been posting is because in August of last year I moved in with The Sister. As you can imagine since i work from home, and The Sister is not currently working, we are together pretty much 24/7.

Herein lies the dilemma. Poking fun at The Sister's insanity is fine when it happens, perhaps once or twice a year but now that we live together, I have to think before I blog. 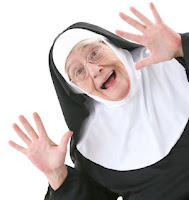 Previous to us 'shacking up together', I would see her perhaps once a month and she didn't always say or do anything that would merit ridicule. When she did do something that struck me as funny and blog worthy I would not hesitate to blog it. She would then either be amused or slightly less than amused but she would eventually get over it.

During our first months together, I decided that it was not worth the grief or drama to poke fun at her obvious dementia for the amusement of (quite possibly) five or six readers that I have never met. And of course I didn't have to sit across from her at the dinner table every night while she was 'getting over it'.

Okay, so five or six might be stretching it, but you get the idea. Any whoo...today as we were driving home I said something that cracked her up and she said to me. "You should write that on your blog."

After I explained the reason I was not blogging, she gave me her blessing.(I know...I told you she was insane.)

So, from this day forward I will not sensor myself as far as the blog goes. She has promised not to get her panties in a bunch and because of the aforementioned dementia I figure she will forget it as soon as she reads it anyway. You don't know what I am talking about but in the weeks to come...all will be revealed.

Email ThisBlogThis!Share to TwitterShare to FacebookShare to Pinterest
Labels: sister